There are almost 4000 different species of spiders in North America alone—what's worse is that each and every one of them is venomous!

Now the good news! The vast majority of these spiders are completely harmless despite what most people think. The purpose of spider venom is to subdue the spider’s prey which is almost always insects. In brief, it’s an insecticide. Spider venom does not exist to harm creatures (like humans) that are too large for spiders to eat. In fact, in nearly all cases has little if any effect on humans.

However, there are always exceptions to the rule. The Black Widow and Brown Recluse (Desert Recluse) have venom capable of causing illness in humans. The Black Widow, Hobo, Wolf, Banded Orb Weaver, and a large variety of ground spiders are some of the more common spiders our exterminators deal with here in Utah. Here we have collected a list of common spiders in Utah to keep an eye out for. If you are bitten by a spider or notice any of the dangerous species invading your home, contact your local pest control company in Utah, and one of our spider exterminators will thoroughly treat your property.

To help you identify what arachnid you are dealing with, you put together this short guide to the most common spiders that can be found in Southern Utah. 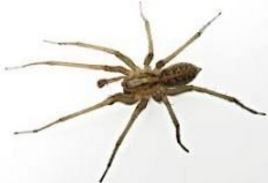 Native to Europe, the aggressive house spider, or western hobo spider, was accidentally introduced to the Northwestern United States in the 1980s. Fortunately, they are found primarily in Washington, Oregon, Wyoming, Colorado, Northern Utah, Montana, and the Pacific Northwest United States. Hobo spiders belong to the family Agelenidae, a group of arachnids known for their funnel-like web construction. They spin horizontal layers of entangled silk threads that serve as nests, detection devices, and traps for potential prey. Male hobo spiders are more likely to bite humans because they roam around in the open more often than females, so they encounter humans more often than the females. 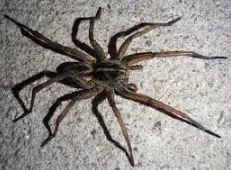 Despite the fact that these are dangerous-looking arthropods, they aren’t actually hazardous to humans. They are brown in color, the adults measure roughly 1/3 to 2/3 inch in body length and 2/3 to 2 inches in leg span. Their abdomens have several chevron-shaped markings. The two large palpi (mouth-parts) that look like boxing gloves make it easy to distinguish the male from the female. Additionally, females tend to have a larger and rounder abdomen when compared to males. Wolf spiders like to roam alone at night to stalk their prey, so they will most likely be in hiding during the day. 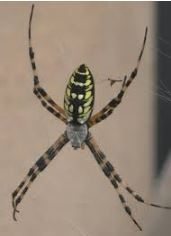 There are many different species of Orb Weavers that differ in color, shape, and size. The commonly seen Garden Orb Weavers are 2 to 3 centimeters in length for the female and 1.5 to 2 centimeters for the male in body length. Most are stout, reddish-brown or grey spiders with a leaf-shaped pattern on their fat, roughly triangular abdomens, which also have two noticeable humps towards the front. Orb Weaver Spiders sometimes have a dorsal stripe which may be white or brown edged with white. Despite their menacing appearance, banded orb weaver spiders are not harmful.

These are found on every continent in the world except for Antarctica and resides in a variety of habitats. Ground spiders are most likely to be found beneath rocks, logs, and other objects on the ground (they are called ground spiders, after all.) They are reclusive in nature and rarely leave their homes other than to hunt. These spiders may venture indoors, especially when temperatures drop, but in this case, they will be few in number and not likely to be seen. Surprisingly, ground spiders do not trap prey in a web, as a matter of fact, they hunt for insects during evening and night hours. During the day they conserve energy by hiding under rocks or logs or indoors in a dark place.

While the spiders listed above are fairly common, so are these two. Black Widows and the Desert Recluse Spider are relatively common in Southern Utah, but extremely dangerous. 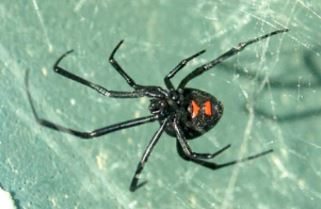 One of the most venomous spiders found in North America is the female Black Widow. The venom of the black widow is 15 times as toxic as the venom of the prairie rattlesnake. This venom attacks your nervous system, and some people may have little to no reaction while other people can become very ill. This bite can be deadly for small children, so it's important that you seek medical attention immediately. Only the female black widow is dangerous to humans, unlike the males and juveniles which are harmless. The female black widow will, on occasion, kill and eat the male after mating. 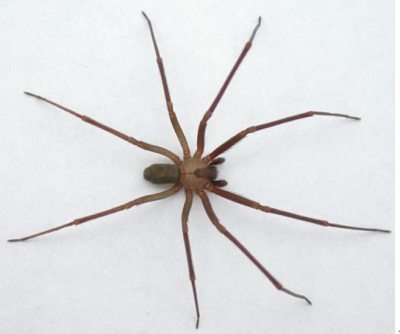 This is definitely one I hope I don’t come across! They are usually a tan to dark brown color and 1/4 – 1/2 inch long. The desert recluse is known for the fiddle-shaped marking on its back. One of their tell-tell features is the fact that they have 6 eyes instead of the normal 8.  They tend to stay away from populated areas, they like the outdoors and are often found in packrat dens. The Desert Recluse is highly venomous! In the event that you are bitten by one of these poisonous spiders seek medical attention and if possible bring the spider with you.

If any of these spiders have found their way into your home or garden shed, the best way to control their presence is by removing their source of food. Spiders primarily eat other insects, so reducing the presence of other pests in your home will make spiders less interested in invading your home. Some spiders, such as the desert recluse and ground spider, rest beneath boxes and other objects that will provide them shade and protection. Regularly cleaning your garage or shed will disrupt their habitat and make them less comfortable in your space. We've compiled a list of steps you can take to deter spiders from remaining in your home:

If you can't seem to rid your home of spiders, look to Western Pest Control and our spider exterminators will thoroughly treat your property with efficient products to remove spiders and keep them gone for good.  Contact us today or check out our pest control services!

Get a Free Estimate